You know the saying:  Throw spaghetti at the wall, and see what sticks.  That in and of itself is not bad when you are making a doc.  But if it's your only approach, you will limit yourself.

I I do not believe you need every element locked down before you start shooting, but I do think the best is to really think about what you want to say, and who you want to say it to.  Are you following a character more or working to illustrate an issue?  The best documentaries do both, but in my experience, the filmmakers usually start with one or the other.

So here is my experience of the Spaghetti Trap:

It started with filmmakers whose approach began with an issue.  Their take on filmmaking was "Go shoot everything  you can or who ever you can about this subject"  Period.  Once they started on the hunt to get this one or that person to speak on camera, they were consumed by the hunt.  Once they started the shoot, driving around from state to state in a van, they were consumed by the shoot.

They showed up in my edit room with 130 hours of footage and no outline, no script, no real idea of what would hold all these ideas together. 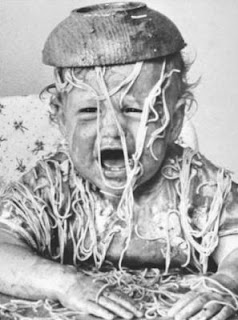 I was able to eke out the semblance of an arc from tiny fragments they'd captured, almost by accident along the way - and though they'd captured amazing footage and interviews, and though they won awards with the finished film, they could have done better and gone farther with it if they'd had more of an ARC to their story.

Can you see the trap here?

If we could have gone back in time, they might have begun work with their editor (me perhaps) or someone else BEFORE they went shooting - why?  So they could really think about the key mechanism for tying this information together.  Are we going to follow one character on a quest for information?  Are we going to track one person through their recovery through the situation we are documenting with bits and bobs tangenting off to the side, but with a through arc created by that person?

The very act of considering the film as more than a list of interviews, would have raised their consciousness so that on the road, shooting, they would be able to stick around long enough to follow someone to capture an arc.  They could have included themselves as the characters on a quest.  Or do what ever they had decided wanted to do - from thinking about it BEFORE HAND.

The point I am trying to make:  While your plan/script/structure can change as often as you need it to, building in the discipline of thinking about your film as a whole will give you a WHOLE lot more complete material for making your film operate at a much higher level.  You will truly optimize your shooing, and make your editor VERY HAPPY!

Stephanie Hubbard is an award winning producer and editor who teaches documentary at the Syracuse University Program in Los Angeles, and private workshops for filmmakers who want to make their best possible film.
Posted by Stephanie Hubbard at 9:32 AM