The Art of Improv and the Documentary Part I 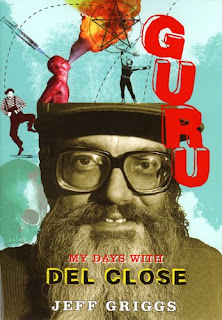 Happy Solstice Dear Reader,
Some of you may know that I, Stephanie Hubbard, the "Documentary Insider", also actively study and perform comedy improv at one of the best schools in the country, iowest, formerly known as improv olympic.
This morning, I started thinking about the two art forms, Improv and Documentary and why I'm so involved with both.
And the most obvious thing is that they both rely fully on improvising: being able to create art on the fly, as it happens, being alert and involved, reacting in the moment - or rather the millisecond.
So, how might we apply principles of improv to documentary filmmaking?
1) Even though, in the art form of comedy improv, "Nobody knows what anyone will say," we do learn and agree on the form we will do. This typically involves structure. What is the structure? In the most successful long forms, (Here I will refer to "The Harold" a long form of improv developed at the Improv Olympic under the beloved Del Close, recognized as the father of improv by many) First, there is an OPENING, which will inspire, and in so doing actually encompass all that follows it. (A great opening in an documentary should both be at the beginning AND encompass all that is to follow.) Then there are three different SCENES. They are unrelated but inspired by the opening, and are typically two person scenes. The most important thing in these scenes is to establish RELATIONSHIP, who are these people to each other - from this comes all else. Then there is a GROUP GAME - typically inspired by the opening. Then we have second beats of each of the SCENES in the first beats - in these second beats you can have more people interacting with the characters established in the first beats. In improv we follow CHARACTER, not plot. These beats can be longer, developing aspects of the characters. Then we have one more GROUP GAME, then SCENES - or Third Beats, that have each of the story lines merge - it turns out that the woman in 2A is actually married to the mail man in 1C and so on. This is also the time that the characters TRANSFORM according to our point of view about the themes that have emerged from within the Harold.
Each scene is developed by the improvisors listening to each other and responding in the moment, but each improvisor is working according to the structure of the piece, moving towards transformation, and a conclusion.
Now how does this apply to Documentary? Well, just as we can really listen to our subjects and to the issues and themes arising from what it is we want to say in our documentary, we might benefit from having a structural road map we are following. And the road map we choose for a Documentary, might be strikingly similar - we have first act - that establishes our characters and their relationships. Our act two is longer, has more ins and outs, more characters perhaps, then we have our act three, or transformation act - also, we have a time when we know it will all come together to say more about the whole than we expected. This is because on some physiological level, the audience is satisfied by transformation and by elevating the conversation to more than they expected. And by doing this in your documentary, you will create a more powerful film.
Stay tuned, tomorrow - the importance of Not Judging, Being in the Moment, and Listening, all key elements of successful improv & successful documentary filmmaking.
To see the sort of improv shows I'm talking about, check out the schedule at www.iowest.com
Posted by Stephanie Hubbard at 10:21 AM