What does a person really need to know to make a movie? 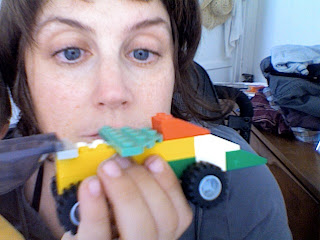 I'm preparing to teach a documentary class for students for my alma mater here in Los Angeles, and have been faced with a tough question: What is more important in learning how to make a documentary - focussing on what you want to do, and making it internally coherent and workable/fundable or looking at what experienced artists working in the realm of documentary have done?
When I was at University, I never took a documentary class, but even in my narrative classes it didn't really seem that we did either. We would be sent out in teams with very little (none) technical training. The person who already knew how to run camera would end up running camera the person who already knew how to edit would edit etc. There seemed to be very little room for either experimentation or failure. I found that the atmosphere of university, knowing my work would be presented for all to see put me in the mind set of perfection.
Of course our society tends to take this thing, Film Directing, which is one of the last great arts that requires the sort of apprenticeship and time to develop that our society doesn't seem to allow - and kind of imbues it with a sort of, "Either you are or you aren't" thing.
Thus you have a bunch of 19 year olds, who are film directors by virtue of the fact they say they are, and a lot of other people, no longer students, trying to look perfect at the beginning of their career, who once maybe pronounced their director nature, but now realize that doesn't work, and are now really learning, and making mistakes on their own dime. After they dedicated person has experimented and failed, finally, they really learn the ropes and are able to make a really remarkable film.
I believe the number one thing I can teach to a person to make them a documentary filmmaker is to do what will spare them the years of heartbreak and oodles of money. And that thing is: To actually THINK about what you are going to do, and how you are going to do it. And then make it better, and better and better.
I feel like I say this a lot, but I keep being confronted by people making films, even directing films who haven't really thought too much about what they really want to say or how they want to say it. They are drawn into the technical aspects - the shooting, the chase for the right interview, the research, the money, the travel.
It almost seems like the largest challenge to being an excellent documentary filmmaker is that there is always a distraction that will make you feel productive. And while it may actually have a positive impact on your film - there is NO replacement for sitting still, and really writing about what you want to say and how you want to say it, and ideally, working through your structure in a way that leads to a satisfying transformation.
Sitting down and working through your subject matter is necessary to find the really big ideas that give the viewer that absolute satisfaction when they realize you've taken them on a much bigger journey than they expected, and finally, really imagining your tone and your style, finding the poetry of your shots and if you use it, the poetry of your voice over, your edits, and your texture. Then you are free to experiment, because you know where you are going. If you have hiccups or failures, it's not fatal, because you actually have structure, and a plan, so you can identify your issues right away.
Other wise the whole thing becomes a chase to the goal of not having wasted all your time and money on a film that you can't sell.
Watching other people's work can serve as windows into ways to do things, but doesn't substitute for doing your work yourself.
And of course it's that work that we do in the Documentary Insider Workshop.
I must have learned something back in grad school, because it served as the benchmark between my life as a sales person and my life earning a living making film, but it was after making films for over ten years, and closely observing people spending millions of dollars on their projects that I internalized what needs to happen to make a film so good, it hurts. And what I went through in the last twelve years, is exactly what I teach, and that is how to do the work of an artist. All of which we do in class.
I'm continuing to teach privately at my office in Los Angeles, and if you are interested in working with me remotely we can do that too. If you are making a documentary, start your artistic investigation now, in my workshop, and start cutting down on the years, and mistakes you will have to make to get to where you want to be.
Best,
Stephanie.
email me at huranghu@gmail.com if you'd like to sign up for the private workshop.
Posted by Stephanie Hubbard at 3:27 PM