A Conversation with Documentarian Kirby Dick 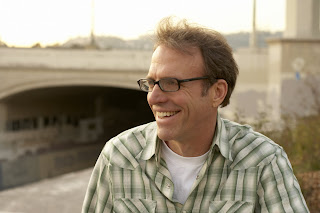 The academy award nominated film maker gives his thoughts on:

How to choose subjects for your documentary

Whether or not to make a Fundraising Trailer

And the "secret" that he thinks is indispensible advice to all documentary filmmakers, especially new ones.

I first met Kirby when his first feature film was coming out, “Sick: the Life and Death of Bob Flanagen, Supermasochist”. I was honored to go to the premiere, and even to help a little with promotional items. (Nails. If you’ve seen the film you’ll know why)

A few years later, I interviewed him for the Los Angeles Film Festival screening of “Twist of Faith” his HBO film about a firemen, Tony, who had decided to come out about being sexually molested by his priest as a teenager.

Every time I meet Kirby, he is forthcoming and friendly. Even after being nominated for an academy award he continues to be a luminous light in the world of contemporary documentary.

Here’s what he had to say when I asked him how he chooses his characters for his documentaries:

Kirby: That is a very good question. Your subject is one of the top two or three most important elements of a documentary. First of all, it’s good if the potential subject likes the camera. It’s good if they play to the camera and if they like to be filmed.

Certainly I’ve had situations where someone seems fine, but once you start shooting, they become reluctant in front of the camera. So if you start with someone who is naturally an extrovert that really helps.

Of course it is important to choose a subject that relates to what you want to say. As a filmmaker, you want a character whose story is iconic – that has a story that captures all the permutations of the issue you are exploring.

It’s also very important to have someone who is sympathetic as a person – because audiences identify with main character very intensely. Though often you can calibrate this in the edit room. When I started looking at the footage of Tony Comes, the primary subject in “Twist of Faith”, I noticed that he cried a lot. He was very sensitive and he was going through a lot, even so, I was worried that he might be perceived as a cry baby. I addressed this in the film by cutting just before he started crying, so that we could feel the emotion but didn’t see the crying. So when in the film he actually did cry it was much more powerful. It’s almost always effective, if at some point during the film, your main character does break down, but their emotional arc needs to be calibrated otherwise – at least in this case – people might otherwise turn away from him.

Documentary Insider: I have a student who is considering several people within the world of her documentary. What is the best way for her to determine who would be best to make her main character?

KD: She should go shoot them all.

It’s a good idea to just shoot any one who could be a main character because you never know what story is going to develop into something that becomes the spine of the film. For example, you might have one potential subject more charismatic than the other, but the other one’s mother dies, or they break up with their partner. Ultimately these could be things that are going to make them a better character

So, this is how I would proceed: first of all just go shoot all these people. Shoot them in situations, for a day or a half day. You learn a lot from them by shooting them in a half day. You’ll impress them just by showing up with a camera, and it can even be your own little consumer camera. And they’ll start to tell you things on camera. And what ever they won’t tell you on camera they will tell you immediately afterwards, so you’ll learn things about them which will help inform which character to follow.

You might even end up using some of that footage in the film.

And then, of course you’ll be able to review the footage, and show it to others to get their input and help you make the decision.

If they are out of state, then you get on the phone talk with them, get a feel if they are eager. In the case of Tony, he really wanted to do the film. When I met him he asked me if I paid subjects. I told him no, and he said, “That’s good because I don’t want anyone to think I did this for financial reasons.” So I knew we had the right guy.

DI: What about approaching the “Villain” or antagonist of the story. Any suggestions?

KD: Don’t assume the antagonist won’t talk. Even though they might be suspicious or not want to do it, often they will want to talk if they can get their point of view in the film. I’ve even found that they often don’t mind being attacked because it builds their credibility with their own base.

One way to approach them is to let them know you want to tell two sides of the story. Surprisingly people seem more open if you are a student or recently graduated – always try – I’ve often been surprised at who says yes.

DI: What is the best way to approach a potential subject?

KD: What works best is to be sincere and very knowledgeable.

Be willing to deal with any reticence and be clear that they don’t have to answer any questions they don’t want to.

DI: Do you try to let potential subject know all the hardships of being a subject up front – or do you let them discover that for themselves?

KD: Well, ease into it. Of course don’t lie, but the fact is most subjects have no idea what they are getting into –but typically, as an extrovert they enjoy it.

It’s very exciting to be the subject of the documentary, being followed around. Suddenly everything they do is of interest. Being the subject of a documentary is a very special experience. Sometimes when it’s over, there can be a feeling of “Where’s my crew?”

Sometimes, when you encounter a problem with your subject, like exhaustion, it’s on you the filmmaker to help them pull through for the film, to let them know, “We only want to make this film as good as possible.” Or “We want to get this film into Sundance.” (laughs) that works a lot.

Of course, have the release signed before you start shooting. not after. Other wise, it can be very awkward.

DI: Do you have any other suggestions?

KD: Yes. Start shooting before you have money. Don’t wait for grants and funding – go out with a friend - get a camera and radio mikes and just start.

There are a lot of reasons for this:

1) You get footage to raise money.

2) You learn if you actually want to make this film.

3) You get the story started earlier so you get a longer arc and the film has more drama. That’s helpful even if you only get to shoot your subject once every three months, because a lot of very important things can happen to them during that time.

And 4) After you’ve shot, do some initial editing of the material. This will inform you how to approach future shoots and you’ll be better prepared.

Okay, and one other BIG thing:

Go through a screening process in the editing stage. So many people just do not do this, and it’s so helpful: When you get your film to a second or third rough cut you should start to have screenings. Invite people over, give them snacks. Then they watch the film, and afterwards tell them you'd like them to respond to any and every element of the film. Begin by letting people speak. If they turn to you and ask your intention, defer that by asking if others in the group share the commentator’s opinion. You don’t want people’s response to your intention – you want their response to what they’ve seen.

After about 45 minutes, I start asking questions I’ve prepared in advance –whether they like the music, if they like certain minor characters. Do they understand a specific comment made by someone in the film – and as I go through this list it opens up further discussion.

You can use as few as 2 people but it’s better to use 5 or more – bu generally no more than 15. And I have different people for each screening.

By doing this I can find out if a major character is working. If everyone in a room says they really don’t like a particular character I would probably try to remove that character for the next screening and see how the film played. It’s possible to save yourself 10’s of thousands of dollars on editing time, and make a better film this way. The less experienced you are the more important it is to do it. I do it on every film.

Also, start editing very early in the process, while you’re shooting - you’ll see how well you are covering the subject matter in your shooting. I always start cutting while I’m shooting.

DI: I see a lot of people making trailers to raise money. What’s your opinion on this?

KD: In general unless you know how to make a trailer – you should probably just start cutting the film.

I usually discourage people from making fund raising trailers. Particularly if they are inexperienced filmmakers they won’t get money based on trailer.

So that’s my last suggestion: Just start cutting your film. Start shooting it, and cutting it. And don’t be discouraged. Making documentaries is hard. Don’t give up easily.

DI: Thanks so much Kirby for your time and wonderful wisdom.

KD: No problem, my pleasure.

Posted by Stephanie Hubbard at 11:10 AM

Thanks for sharing this, Stephanie! Quite interesting to hear his perspective and see where it intersects my own, and where it diverges, and how I can think about things in new ways.

Thank you, Stephanie. This was a very interesting read!